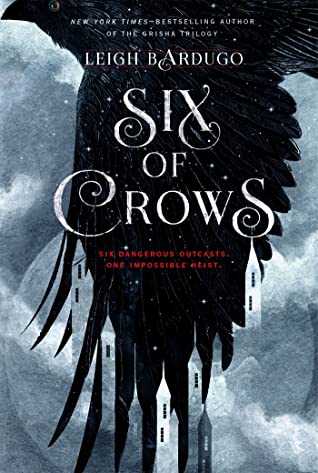 I can visualize some of your eyes rolling as you think about how late to the game I am, but hear me out: I actually purchased this book when it first came out so at least there’s that. However, I gave it as a gift to my niece and never actually read it. Now that I have, I’m reviewing it for maybe some others who haven’t heard of it. There is a possibility, after all, that I am not the last person to read this book.

My Synopsis.
A rag-tag team of thieves, assassins, spies, and gamblers join together for a heist that is all but impossible. Their collective skills include a healthy variety of real-world and fantasy-world talents with all the faults and sacrifices of gaining any powers or abilities. These characters are all very much flawed, and the story is told through their individual point of view as the adventure unfolds. Each of them has a different tale to tell, but everything weaves together, and it’s clear their stories will reveal a much larger tapestry than what is in this book alone. However, each individual thread is intriguing on its own.

Why I picked this book.
When I initially chose it to give to my niece, it was because of the reference to a crow. Who doesn’t love crows? And it’s a lovely book visually. The artwork drew me in and I judged a book by it’s cover. (it’s called marketing and it works)

But as I read a bit of the middle of the book (that’s right, I read the middle, not the back cover, not the synopsis), I decided I liked the tone and loved the idea of a female spy/assassin.

Any disappointments?
Something on the dust cover gave something away that sort of ruined it for me. I won’t mention it here in case a new reader misses that clue. Plus, I figured something out early on and knew how a significant piece would end. It took away my usually burning desire to continue a book every second I had free time.

What kept me reading?
There were so many other little side stories and plots going on, plus the world-building was so well done I had a place to visit with each read. And the characters, although each terrible in their own way, still held my curiosity (and maybe some sympathy). Plus, there are so many other books in this series (and in this world) I had to catch up.

Takeaway.
I watched the Netflix Shadow and Bone before realizing it was tied to this book. Watching the show didn’t ruin anything, and after reading the book, I still feel they are different experiences. I plan on watching and reading more of this world. It’s not pulling at heartstrings or inspiring me in any major way, but it is good storytelling, well written, and easy to read. It’s the kind of book that keeps your interest but isn’t going to keep me up at night turning pages beyond bedtime. This entire book is basically about just one heist, and it utilizes the characters’ perspectives, doubts, and motivations to tell a larger story outside of this heist plot.

Final thoughts.
To better explain how well this book is written, let me state that I neither relate to nor really like any of the characters, and again, not a whole lot happens in this book. Don’t get me wrong, it’s full of tension and adventure, but all around one big heist. However, much is revealed, and a rather grand stage is set. For now, you have the fairly unlovable characters and a heist. But this is beyond your typical “flawed but relatable” characters. Leigh Bardugo makes these characters almost pathetic, beyond relating to, yet so realistic. Yet I can’t help be curious, possibly concerned, even. And I fear this will increase with each book as the characters have only just begun to reveal themselves in this book.

dog groomer, dog trainer, and storyteller for children and the young at heart. View All Posts