Recently I finished The Starblade Chronicles series by Joseph Delaney and did not come to the end with the usual sadness and grief I have when finishing a well-loved book. I enjoyed them, but as my nephew said when I asked how he liked them, they were “eh”. This could, of course, be because Delaney’s previous series The Wardstone Chronicles was so incredibly addictive to both me and my nephew. The original series has 13 books total and when I had first learned of them my nephew owned three. He urged me to borrow all three but I was doubtful and only borrowed the first titled “The Spooks Apprentice” of which most people are familiar. After reading the first book, I hastened to read the other two he had, and then before I knew it had purchased the entire series for him just so I could read them. With all the killing and monsters and the romantic interest the main character was beginning to have, I was also reading them as a precaution before giving them to my young nephew. I would often call my sister to describe scenes from the book to get her approval before passing along the book. It would have been difficult to deny him access whether she approved or not because as she mentioned, he was really enjoying the series. So was I. It was the kind of book that took you to a place and you missed your fictitious friends during the day when you weren’t reading the book. It made me eat a lot of cheese because that’s what the Spooks eat when on a job. It had all the great pieces of a series including kids growing up, family, changing friends, changing enemies, epic fights, mystery, and the ever elusive nemesis. This is why I was keen to purchase the next series when I saw it available.
Unfortunately, the three books in the second series fell short for me. Perhaps too much had happened in the original series to make a continuation feel natural. The main character had too many things going on in his heart and mind to truly be reliable, relatable, sure, but not reliable. He simply wasn’t the Tom Ward I had come to know and depend on to get me through a story. It would have been nice to reconnect with him after he’d gone through the understandable period of change one would need to go through after the previous books’ events, instead, we had something less three dimensional. We were thrown into an emotional mess who seems to feel more of a newly introduced side character rather than a steadfast hero we’ve come to love. He is lazily motivated by uncertainty and chance and he became a bit of a bore for me. The other characters who were from the previous series were also in such turmoil they were difficult to connect with. Instead of feeling like I was visiting with old friends, everyone felt like new characters to me, but with less depth. The one new character Jenny they introduced had such a mysterious background that making a connection with her was difficult. In fact, it felt that Jenny was introduced simply for storytelling purposes. As though there needed to be another point of view for certain parts of the plot and therefore a new person was introduced. It was difficult to care about her throughout the entire series. I tried, I really did, but she was just a name with very little story to her. This did give the story some realism as life is often rather bland and not everyone has great stories to tell, but she became a main character and this is a fantasy series, not a non-fiction biography. I read fantasy to escape the mundane. So there was a huge disconnect not only to the characters but also their adventures.

Speaking of their adventures, they all were spun off one book from the previous series titled Slither. One of the 13 books stepped outside of the world you’d been falling in love with to introduce an ugly place, with a new evil and a character who may be good, may be evil. It was an odd book in the series then, and to have a new series based on this world was just as offsetting. Not only that but the title character introduced in that one book has very little appearance in the series which is based on his world and his creatures. This is well explained, but also disappointing.

As for the Starblade, it was certainly featured, but I think it was a stretch to name the series after this weapon. Not much is ever really explained about its powers, at least, nothing more than what was told in the first series. Anytime it came into use it seemed more of an afterthought rather than any climatic purpose or meaning.

Yet with all my complaining and disappointment, I didn’t stop reading the books. Grimalkin remains one of my favorite fictional characters and I feel as though the adventures of the Northlands could have been her story exclusively while Tom Ward’s story could have been something totally different. Keep in mind, these are just my thoughts, as a reader, not a writer or storyteller. Bottom line is this; if you enjoyed the first series don’t expect more of the same, don’t expect to reconnect, don’t expect a lot of answers. It was a decent enough series to entertain me and keep me reading, but again, as my nephew said: “eh”. 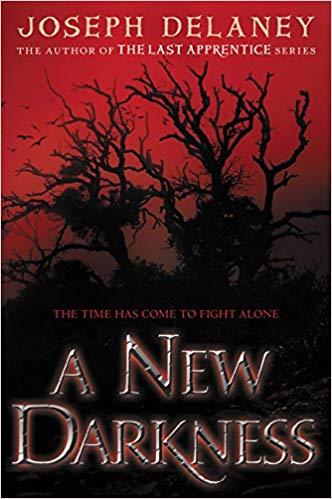